Currently, Empty Set is only deployed on Ethereum L1. With L2’s, particularly Arbitrum and Optimism gaining favor, we want to ensure that DSU is natively available on every chain that it may be useful.

As such, we propose a strategy & implementation for launching DSU cross-chain, beginning with L2s.

We define a structure for DSU to maintain complexity across deployments 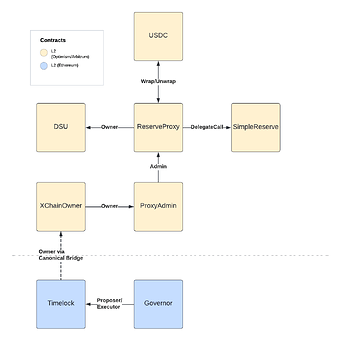 Each instance of DSU will be differentiated with two properties:

For DSU on other L2s or other chains, examples of this might include Compound, Aave, or a chain-native borrow/lend protocol.

These properties are important to standardize as they will be the primary differentiators between each chain’s deployment. For each deployment, and on an ongoing basis, the primary role of the Empty Set DAO will be to continually define & adjust these for each chain to ensure each instance of DSU is operating with the most secure backing.

Our initial proposal will be to deploy DSU on both Arbitrum and Optimism in an MVP state. This will use bridged USDC as the unit of account and a No-Op (held by the Reserve itself) for the depository. This will allow us to get DSU up and running on both L2s while more research is done on whether a depository like Aave or Compound (or another protocol native to those ecosystems) is sufficiently matured to justify being turned on in a future proposal.

An implementation of the above proposal can be viewed here.